For almost half a century, the HKAF has brought visionary new works to Hong Kong. This stunning co-production with the San Francisco Opera marks another milestone, which is bound to be a highlight of the Festival’s 45th anniversary.

Hong Kong is the ﬁrst Asian city to see this new opera after its premiere in San Francisco in September 2016. Primasia supporting the Asian Premier of Dream of the Red Chamber on last Friday 17 March 2017.

Posted in Recent and Upcoming Events and tagged HKAF. 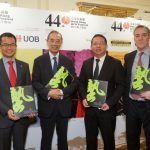